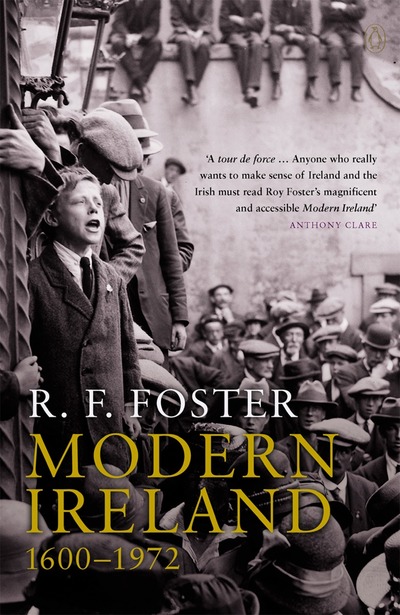 Masterfully blending narrative and interpretation, and R.F. Foster's Modern Ireland: 1600-1972 looks at how key events in Irish history contributed to the creation of the 'Irish Nation'.

'The most brilliant and courageous Irish historian of his generation'
Colm Toibin, London Review of Books

'Remarkable ... Foster gives a wise and balanced account of both forces of unity and forces of diversity ... a master work of scholarship'
Bernard Crick, New Statesman

'A tour de force ... Anyone who really wants to make sense of Ireland and the Irish must read Roy Foster's magnificent and accessible Modern Ireland'
Anthony Clare

'Dazzling ... a masterly survey not so much of the events of Irish history over the past four centuries as of the way in which those events acted upon the peoples living in Ireland to produce in our own time an "Irish Nation" ... a gigantic and distinguished undertaking'
Robert Kee, Observer

'A work of gigantic importance. It is everything that a history book should be. It is beautifully and clearly written; it seeps wisdom through its every pore; it is full of the most elegant and scholarly insights; it is magnificently authoritative and confident ... Modern Ireland is quite simply the single most important book on Irish history written in this generation ... A masterpiece'
Kevin Myers, Irish Times

R. F. Foster is Carroll Professor of Irish History at the University of Oxford and a Fellow of Hertford College, Oxford. His books include Modern Ireland: 1600-1972, Luck and the Irish and W. B. Yeats: A Life.