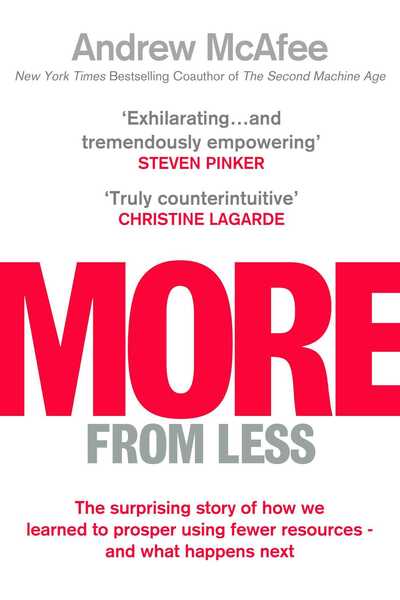 'Everyone knows we're doomed by runaway overpopulation, pollution, or resource depletion, whichever comes first. Not only is this view paralysing and fatalistic, but, as Andrew McAfee shows in this exhilarating book, it's wrong... More from Less is fascinating, enjoyable to read, and tremendously empowering' Steven Pinker
Bestselling author and co-director of the MIT Initiative on the Digital Economy Andrew McAfee says there's a new reason for optimism: we're past the point of 'peak stuff' - from here on out, it'll take fewer resources to make things, and cost less to lead a comfortable life.

This turn of events invalidates the predictions of overpopulation alarmists and those who argue we need to drastically reduce our conception of how much is enough. What has made this turnabout possible? One thing primarily: the collaboration between technology and capitalism.

Capitalism's quest for higher profits is a quest for lower costs; materials and resources are expensive, and technological progress allows companies to use fewer of them even as they grow their markets. Modern smartphones take the place of cameras, GPS units, landline telephones, answering machines, tape recorders and alarm clocks. Precision agriculture lets farmers harvest larger crops while using less water and fertiliser. Passenger cars get lighter, which makes them cheaper to produce and more fuel-efficient. This means that, even though there'll be more people in the future, and they'll be wealthier and consume more, they'll do so while using fewer natural resources. For the first time ever, and for all time to come, humans will live more prosperous lives while treading more lightly on the Earth.

The future is not all bright, cautions McAfee. He warns of issues that still haven't been fully solved. (For example, our oceans are still vulnerable to overfishing; global warming is still running largely unchecked; and even as 'dematerialisation' - the reduced need for raw materials - improves our global situation, power and resources are getting more concentrated. That creates an even larger division between the haves and the have nots.)

More From Less is a revelatory, paradigm-shifting account of how we've stumbled into an unexpected balance with nature, and the possibility that our most abundant centuries are ahead of us.