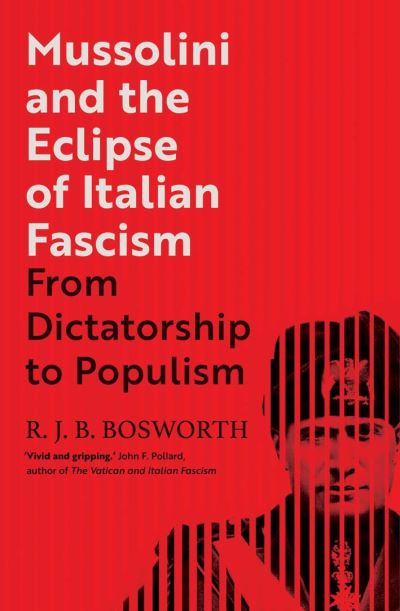 Mussolini and the Eclipse of Italian Fascism

"A passionately engaged history of a Mussolini and an Italy caught up in the monstrous gravitational waves engendered by the coming of Third Reich."-Giuseppe Finaldi, author of Mussolini and Italian Fascism

On the tenth anniversary of his rise to power in 1932, Benito Mussolini (1883-1945) seemed to many the "good dictator." He was the first totalitarian and the first fascist in modern Europe. But a year later Hitler's entrance onto the political stage signaled a German takeover of the fascist ideology.

In this definitive account, eminent historian R.J.B. Bosworth charts Mussolini's leadership in reaction to Hitler. Bosworth shows how Italy's decline in ideological pre-eminence, as well as in military and diplomatic power, led Mussolini to pursue a more populist approach: angry and bellicose words at home, violent aggression abroad, and a more extreme emphasis on charisma. In his embittered efforts to bolster an increasingly hollow and ruthless regime, it was Mussolini, rather than Hitler, who offered the model for all subsequent authoritarians.