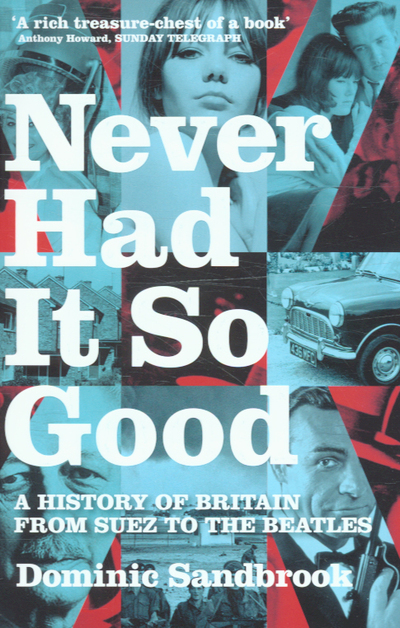 Never Had It So Good

In 1956 the Suez Crisis finally shattered the old myths of the British Empire and paved the way for the tumultuous changes of the decades to come. In NEVER HAD IT SO GOOD, Dominic Sandbrook takes a fresh look at the dramatic story of affluence and decline between 1956 and 1963. Arguing that historians have until now been besotted by the supposed cultural revolution of the Sixties, Sandbrook re-examines the myths of this controversial period and paints a more complicated picture of a society caught between conservatism and change. He explores the growth of a modern consumer society, the impact of immigration, the invention of modern pop music and the British retreat from empire. He tells the story of the colourful characters of the period, like Harold Macmillan, Kingsley Amis and Paul McCartney, and brings to life the experience of the first post-imperial generation, from the Notting Hill riots to the first Beatles hits, from the Profumo scandal to the cult of James Bond. In this strikingly impressive debut, he combines academic verve and insight with colourful, dramatic writing to produce a classic, ground-breaking work that will change forever how we think about the Sixties.