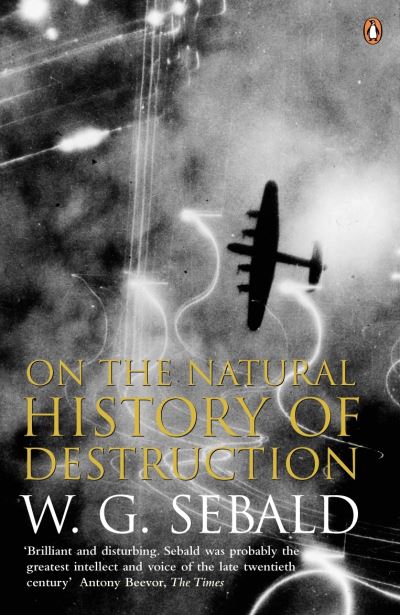 On The Natural History Of Destruction

In the last years of World War II, a million tons of bombs were dropped by the Allies on one hundred and thirty-one German towns and cities. Six hundred thousand civilians died, and three and a half million homes were destroyed. When it has cast such a very dark shadow over his life and work, Sebald asks, how have so many writers allowed themselves to write it out of their experience and avoid articulating the horror? W.G. Sebald's On the Natural History of Destruction sparked a wide-ranging debate in the German press.

'One of the most important writers of our time' A.S. Byatt, New Statesman

'Demands to be read for its grand emotional power ... it absorbs and horrifies and illuminates' Scotsman


W . G. Sebald was born in Wertach im Allgau, Germany, in 1944 and died in December 2001. He studied German language and literature in Freiburg, Switzerland and Manchester. In 1996 he took up a position as an assistant lecturer at the University of Manchester and settled permanently in England in 1970. He was Professor of European Literature at the University of East Anglia and is the author of The Emigrants, The Rings of Saturn, Vertigo, Austerlitz, After Nature, On the Natural History of Destruction, Campo Santo, Unrecounted, For Years Now and A Place in the Country. His selected poetry is published in a volume called Across the Land and the Water.