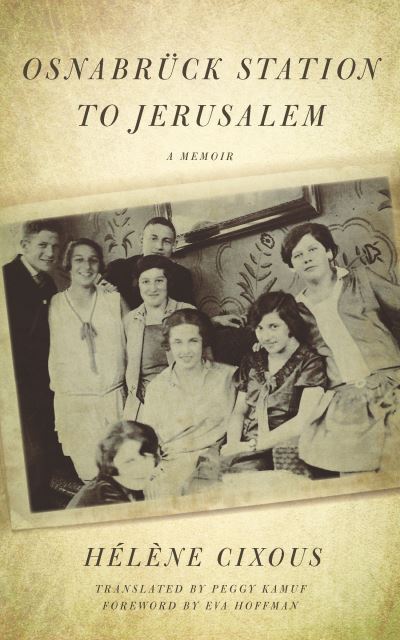 Winner, French Voices Award for Excellence in Publication and Translation

For about eighty years, the Jonas family of Osnabruck were part of a small but vibrant Jewish community in this mid-size city of Lower Saxony. After the war, Osnabruck counted not a single Jew. Most had been deported and murdered in the camps, others emigrated if they could and if they managed to overcome their own inertia. It is this inertia and failure to escape that Helene Cixous seeks to account for in Osnabruck Station to Jerusalem.

Vicious anti-Semitism hounded all of Osnabruck's Jews long before the Nazis' rise to power in 1933. So why did people wait to leave when the threat was so patent, so in-their-face? Drawn from the stories told to Cixous by her mother, Eve, and grandmother, Rosalie (Rosi), this literary work reimagines fragments of Eve's and Rosi's stories, including the death of Eve's uncle, Onkel Andre. Piecing together the story of Andreas Jonas from what she was told and from what she envisages, Cixous recounts the tragedy of the one she calls the King Lear of Osnabruck, who followed his daughter to Jerusalem only to be sent away by her and to return to Osnabruck in time to be deported to a death camp.

Cixous wanders the streets of the city she had heard about all her life in her mother's and grandmother's stories, digs into its archives, meets city officials, all the while wondering if she should have come. These hesitations and reflections in the present, often voiced in dialogues staged with her own son or daughter, are woven with scenes from her childhood in Algeria and the half-remembered, half-invented stories of the Jonas family, making Osnabruck Station to Jerusalem one of the author's most intensely engaging books.

This work received the French Voices Award for excellence in publication and translation. French Voices is a program created and funded by the French Embassy in the United States and FACE (French American Cultural Exchange).