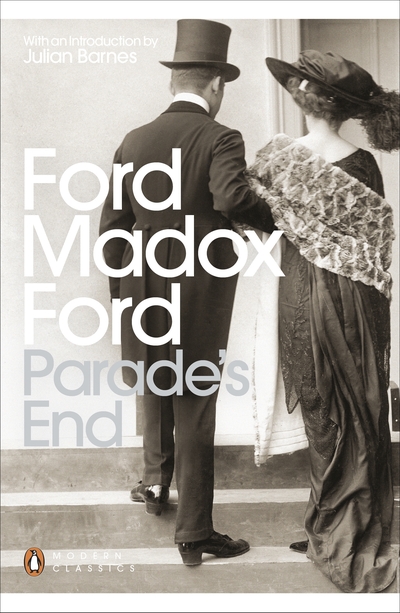 Starring Benedict Cumberbatch as Christopher Tietjens, Rebecca Hall as his wife Sylvia and also featuring Rupert Everett, Carey Mulligan, Roger Allam and Miranda Richardson, this lavish production from a screenplay by the legendary playwright Tom Stoppard brings to life for the first time one of the twentieth century's most significant novels.

A masterly novel of destruction and regeneration, Parade's End follows the story of aristocrat Christopher Tietjens as his world is shattered by the First World War. Tracing the psychological damage inflicted by battle, the collapse of England's secure Edwardian values - embodied in Christopher's wife, the beautiful, cruel socialite Sylvia - and the beginning of a new age, epitomized by the suffragette Valentine Wannop, Parade's End is an elegy for both the war dead and the passing of a way of life.

Ford Madox Ford (1873-1939) served with the British army in World War I, an experience that was to form the basis of his novel Parade's End, published in four parts from 1924 to 1928. He wrote over eighty books, including The Good Soldier (1915), and divided his time between England, France and America.

Julian Barnes' most recent novel is The Sense of An Ending, for which he won the 2012 Man Booker prize. His other books include Flaubert's Parrot, A History of the World in 10 1/2 Chapters and Arthur and George.

'The finest English novel about the Great War'
Malcolm Bradbury

'There are not many English novels which deserve to be called great: Parade's End is one of them'
W.H. Auden

'The English prose masterpiece of the time'
William Carlos Williams