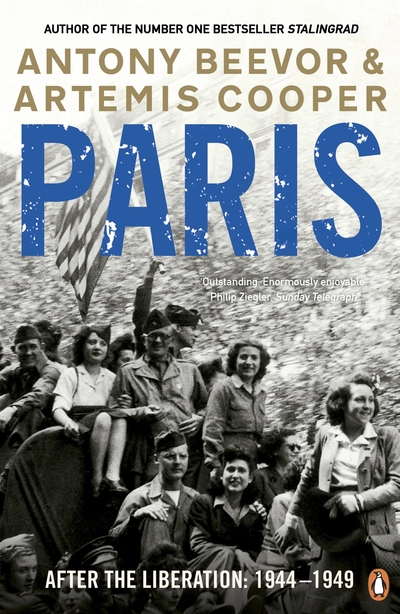 Paris After the Liberation

Antony Beevor and Artemis Cooper's Paris After Liberation: 1944-1949 is a remarkable historical account of the chaos and uncertainty that followed the liberation of Paris in August, 1944

'A beautifully written book about a vast tapestry of military, political and social upheaval. Remarkably well-researched, wise, balanced, very funny at times . . . I was a witness to events in Paris in the first desperate, glorious, mad weeks, and this is just how it was'
Dirk Bogarde

Post-liberation Paris: an epoch charged with political and conflicting emotions. Liberation was greeted with joy but marked by recriminations and the trauma of purges. The feverish intellectual arguments of the young took place amidst the mundane reality of hunger and fuel shortages. This is a thrilling, unsurpassed account of the drama and upheaval of one of history's most fascinating eras.

'A dashing, multi-dimensional story. This book covers all aspects of life - diplomacy, strategy, rationing, politics and politicking (from Churchill, Petain's and de Gaulle's point of view), the international theatricals and the tourist invasion, blitzkrieg and Ritzkrieg - to create a lovely tapestry, threaded with facts and figures'
Olivier Todd, Sunday Times

'Absorbing . . . a rich, many-layered account, selecting from official documents, private archives, memoirs and histories with a wonderful lightness of touch, so that the most complex events become clear' Jenny Uglow, Independent on Sunday

Antony Beevor is the renowned author of Stalingrad, which won the Samuel Johnson Prize, the Wolfson Prize for History and the Hawthornden Prize for Literature, and Berlin, which received the first Longman-History Today Trustees' Award. His books have sold nearly four million copies.