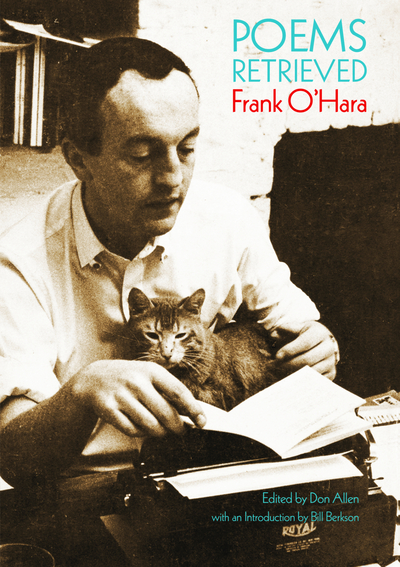 Originally published under Donald Allen's classic Grey Fox Press imprint, Poems Retrieved is a substantial part of Frank O'Hara's oeuvre, containing over two hundred pages of previously unpublished poetry discovered after the publication of his posthumous Collected Poems in 1971. Featuring a new introduction by O'Hara expert and friend, poet and art critic Bill Berkson, Retrieved has been completely reformatted and is essential for any reader of twentieth century poetry. As Berkson writes, "The breadth of what Frank O'Hara took to be poetry is reflected in the many kinds of poems he wrote...Turning the pages of any of his collections, you wonder what he didn't turn his hand to, what variety of poem he left untried or didn't, in some cases, as if in passing, anticipate." Among the most significant post-war American poets, Frank O'Hara grew up in Grafton, Massachusetts, graduating from Harvard in 1950. After earning an MA at the University of Michigan in 1951, O'Hara moved to New York, where he began working for the Museum of Modern Art and writing for Art News. By 1960, he was named the assistant curator of painting and sculpture exhibitions at MOMA. Along with John Ashbery, Kenneth Koch, James Schuyler, and Barbara Guest, he is considered an original member of the New York School. Though he died in a tragic accident in 1966, recent references to O'Hara on TV shows like Mad Men or Thurston Moore's new record evidence our culture's continuing fascination with this innovative poet.