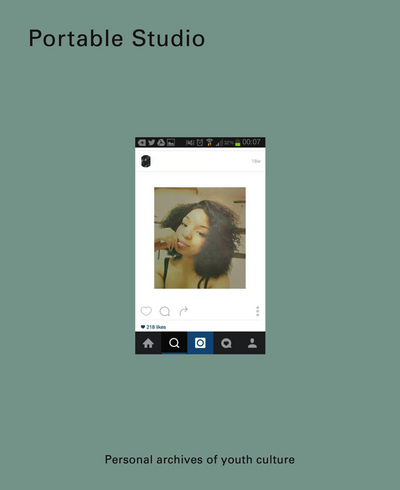 Portable studio documents contemporary British youth culture, and was created in collaboration with the young people Appleson met and photographed on the streets of Birmingham in 2014. Inspired by the way identities are now curated online, the project works with a wide range of individuals to create an 'archive' of found and commissioned material, exploring identity and experience as expansive, multimedia portraits. Portable Studio inverts the traditional idea of the studio portrait/street photograph - the 'snapshot' is now just the starting point. In 2014 Trevor Appleson was commissioned by MAC Birmingham and the Library of Birmingham to create a new body of work exploring the city's youth culture. Equipped with a film camera and a plain black cloth to use as a backdrop for his photographs, Appleson went out into the streets of Birmingham to its music venues and its shopping districts, in daytime and at night and photographed its youth, from ravers to girl guides, most in their teens and early twenties. Portable Studio will feature approximately 200 portraits alongside a fascinating archive donated by the sitters; a unique mix of physical and digital material ranging from crumpled diaries to selfies posted on social media, the contents of 'memory boxes', to vintage family photographs and Google search histories. The book is divided into three sections: Portraits: grouped by location and 'tribe', ravers, punks, rockers, school kids etc. Archives: 70 personal archives from selected subjects invited to collaborate further. Index: an annotated index completes the project with notes and descriptions. Supported by Arts Council England, Portable Studio is a critical document of contemporary British youth culture, made in collaboration with a selection of the 700 young people Appleson photographed for his commission.