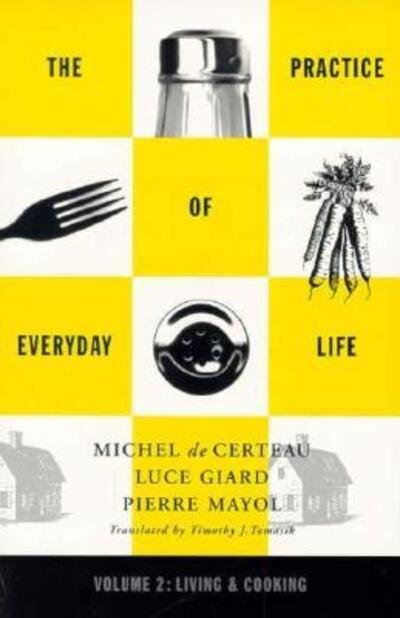 To remain unconsumed by consumer society-this was the goal, pursued through a world of subtle and practical means, that beckoned throughout the first volume of The Practice of Everyday Life. The second volume of the work delves even deeper than did the first into the subtle tactics of resistance and private practices that make living a subversive art. Michel de Certeau, Luce Giard, and Pierre Mayol develop a social history of "making do" based on microhistories that move from the private sphere (of dwelling, cooking, and homemaking) to the public (the experience of living in a neighborhood). A series of interviews-mostly with women-allows us to follow the subjects' individual routines, composed of the habits, constraints, and inventive strategies by which the speakers negotiate daily life. Through these accounts the speakers, "ordinary" people all, are revealed to be anything but passive consumers. Amid these experiences and voices, the ephemeral inventions of the "obscure heroes" of the everyday, we watch the art of making do become the art of living.This long-awaited second volume of de Certeau's masterwork, updated and revised in this first English edition, completes the picture begun in volume 1, drawing to the last detail the collective practices that define the texture, substance, and importance of the everyday.Michel de Certeau (1925-1986) wrote numerous books that have been translated into English, including Heterologies (1986), The Capture of Speech (1998), and Culture in the Plural (1998), all published by Minnesota. Luce Giard is senior researcher at the Centre National de la Recherche Scientifique and is affiliated with the Ecole des Hautes Etudes en Sciences Sociales, Paris. She is visiting professor of history and history of science at the University of California, San Diego. Pierre Mayol is a researcher in the French Ministry of Culture in Paris.Timothy J. Tomasik is a freelance translator pursuing a Ph.D. in French literature at Harvard University.