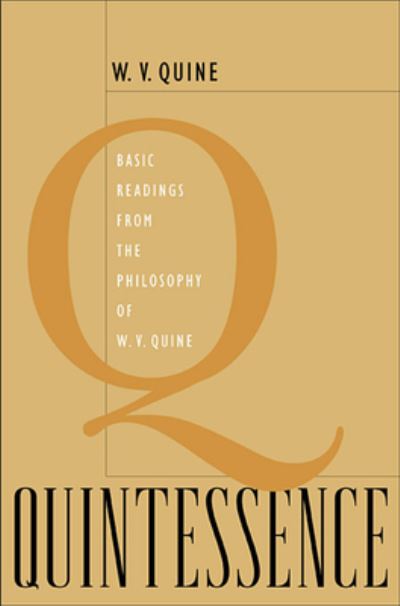 Through the first half of the twentieth century, analytic philosophy was dominated by Russell, Wittgenstein, and Carnap. Influenced by Russell and especially by Carnap, another towering figure, Willard Van Orman Quine (1908-2000) emerged as the most important proponent of analytic philosophy during the second half of the century. Yet with twenty-three books and countless articles to his credit-including, most famously, Word and Object and "Two Dogmas of Empiricism"-Quine remained a philosopher's philosopher, largely unknown to the general public.

Quintessence for the first time collects Quine's classic essays (such as "Two Dogmas" and "On What There Is") in one volume-and thus offers readers a much-needed introduction to his general philosophy. Divided into six parts, the thirty-five selections take up analyticity and reductionism; the indeterminacy of translation of theoretical sentences and the inscrutability of reference; ontology; naturalized epistemology; philosophy of mind; and extensionalism. Representative of Quine at his best, these readings are fundamental not only to an appreciation of the philosopher and his work, but also to an understanding of the philosophical tradition that he so materially advanced.