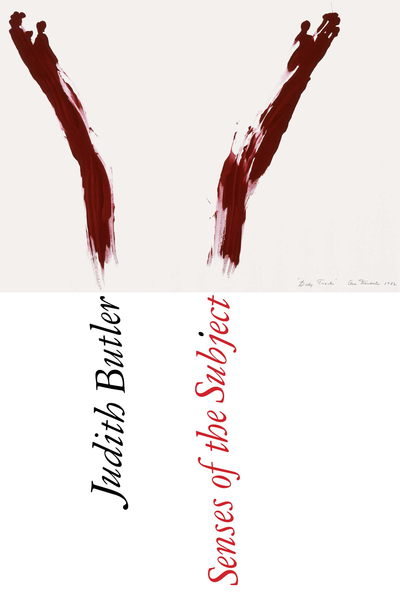 Senses of the Subject

This book brings together a group of Judith Butler's philosophical essays written over two decades that elaborate her reflections on the roles of the passions in subject formation through an engagement with Hegel, Kierkegaard, Descartes, Spinoza, Malebranche, Merleau-Ponty, Freud, Irigaray, and Fanon. Drawing on her early work on Hegelian desire and her subsequent reflections on the psychic life of power and the possibility of self-narration, this book considers how passions such as desire, rage, love, and grief are bound up with becoming a subject within specific historical fields of power.

Butler shows in different philosophical contexts how the self that seeks to make itself finds itself already affected and formed against its will by social and discursive powers. And yet, agency and action are not necessarily nullified by this primary impingement. Primary sense impressions register this dual situation of being acted on and acting, countering the idea that acting requires one to overcome the situation of being affected by others and the linguistic and social world. This dual structure of sense sheds light on the desire to live, the practice and peril of grieving, embodied resistance, love, and modes of enthrallment and dispossession. Working with theories of embodiment, desire, and relationality in conversation with philosophers as diverse as Hegel, Spinoza, Descartes, Merleau-Ponty, Freud, and Fanon, Butler reanimates and revises her basic propositions concerning the constitution and deconstitution of the subject within fields of power, taking up key issues of gender, sexuality, and race in several analyses. Taken together, these essays track the development of Butler's embodied account of ethical relations.