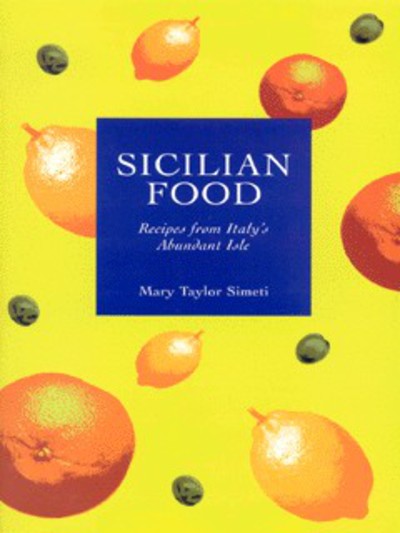 If there is one book that belongs on the shelf of food lovers, it is Sicilian Food by Mary Taylor Simeti. This book is a classic, the definitive work on Sicilian cooking and it is full of authentic, hard to find recipes gleaned from the author's friends, family and acquaintances on the island itself. Originally published in 1989 under the title Pomp and Sustenance: Twenty Five Centuries of Sicilian Food and then unavailable for almost ten years, Mary Taylor Simetis affectionate, exhaustive work has come to be recognised as the definitive book on the food, traditions and recipes of this sun-drenched island. The author, an American married to a Sicilian, set out to discover Sicilian food first hand. She haunted former convents and palaces where Palermo's libraries have been maintained. She tested each ancient recipe herself and updated the methods. Her directions are clear and easy to follow. The book is organized so that the material reflects both the external influences of a series of conquerors, and the domestic changes brought about by peasant, clergy and aristocrat alike. Her chapter titles hint at the enticing discoveries waiting for the reader and the recipes reflect the chapter titles. There are recipes using the vegetable abundance of the Sicilian landscape, for ice cream or granita, and, yes there are recipes for Virgins Breasts and Chancellor's Buttocks. The book contains more than a hundred illustrations from Sicilian archives and museums and the text quotes freely from Homer, Plato, Apicius, Lampedusa, and Pirandello. Simeti's prose is so descriptive that to read it is to be in Sicily.