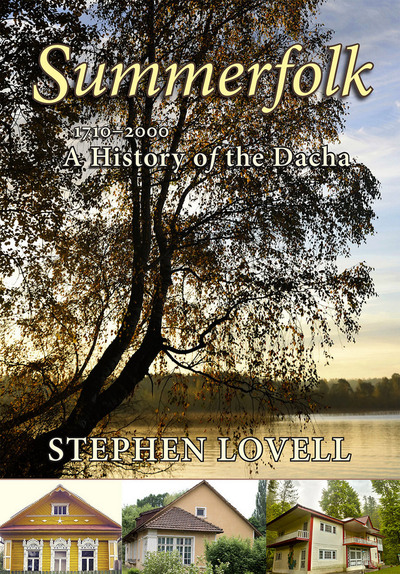 The dacha is a sometimes beloved, sometimes scorned Russian dwelling. Alexander Pushkin summered in one; Joseph Stalin lived in one for the last twenty years of his life; and contemporary Russian families still escape the city to spend time in them. Stephen Lovell's generously illustrated book is the first social and cultural history of the dacha. Lovell traces the dwelling's origins as a villa for the court elite in the early eighteenth century through its nineteenth-century role as the emblem of a middle-class lifestyle, its place under communist rule, and its post-Soviet incarnation. A fascinating work rich in detail, Summerfolk explores the ways in which Russia's turbulent past has shaped the function of the dacha and attitudes toward it. The book also demonstrates the crucial role that the dacha has played in the development of Russia's two most important cities, Moscow and St. Petersburg, by providing residents with a refuge from the squalid and crowded metropolis. Like the suburbs in other nations, the dacha form of settlement served to alleviate social anxieties about urban growth. Lovell shows that the dacha is defined less by its physical location"usually one or two hours" distance from a large city yet apart from the rural hinterland-than by the routines, values, and ideologies of its inhabitants. Drawing on sources as diverse as architectural pattern books, memoirs, paintings, fiction, and newspapers, he examines how dachniki ("summerfolk") have freed themselves from the workplace, cultivated domestic space, and created informal yet intense intellectual communities. He also reflects on the disdain that many Russians have felt toward the dacha, and their association of its lifestyle with physical idleness, private property, and unproductive use of the land. Russian attitudes toward the dacha are, Lovell asserts, constantly evolving. The word "dacha" has evoked both delight in and hostility to leisure. It has implied both the rejection of agricultural labor and, more recently, a return to the soil. In Summerfolk, the dacha is a unique vantage point from which to observe the Russian social landscape and Russian life in the private sphere.