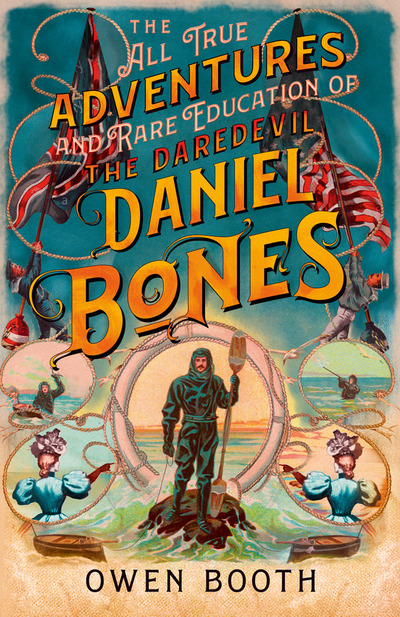 
'"But who among you might assist me on this adventure?" the Captain shouts.


And then the Captain's eyes fall on me, as was his plan all along, and he points me out, making sure just so's everyone can see.


"A strong young man to journey with me across the wild continent, to support me in my life-saving work, and take the name of his village to the farthest corners of civilisation - and paid a wage, of course!"

"Of course!" everyone shouts.'

The 1880s are drawing to a close, and 14(-maybe-15)-year-old Daniel Bones fears that the prospects for him and his younger brother Will may be dimming with the century.

For the motherless sons of a drunken blacksmith, life on a barren spit of land reaching into the Essex estuary holds little promise. Until one evening, from out of the water, there emerges the astonishing figure of Captain Clarke B: cigar-smoking daredevil adventurer, charlatan, casanova and inventor of the world-famous life-saving inflatable suit.

As the Captain embarks on his ramshackle promotional tour of Europe, Daniel is sucked into his wake, on an adventure that will carry him through the waterways of the continent, encountering Kings and Princesses, wealthy widows, irate husbands, anarchists, arms dealers and shadowy power-brokers. It's an education beyond Dan's wildest imaginings, across countries undergoing the convulsions of all kinds of revolution, and one that will open his eyes, and his heart.

But as he travels further into the dazzle of notoriety and the darkness that lies behind it, Dan's promise to return and rescue Will seems ever harder to keep. For in the Captain's world of smoke and mirrors it is all too easy to lose sight of who he is, or the man he ought to be...