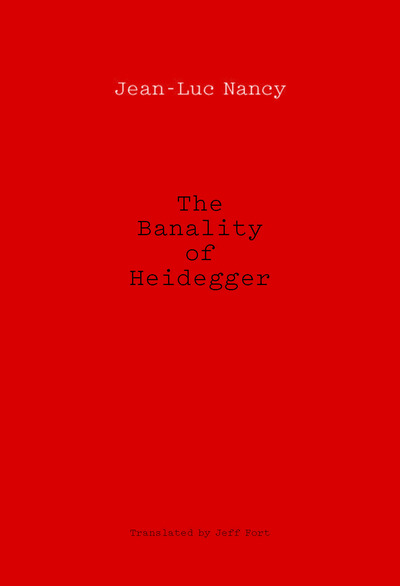 The Banality of Heidegger

Heidegger and Nazism: Ever since the philosopher's public involvement in state politics in 1933, his name has necessarily been a part of this unsavory couple. After the publication in 2014 of the private Black Notebooks, it is now unambiguously part of another: Heidegger and anti-Semitism.

What do we learn from analyzing the anti-Semitism of these private writings, together with its sources and grounds, not only for Heidegger's thought, but for the history of the West in which this thought is embedded? Jean-Luc Nancy poses these questions with the depth and rigor we would expect from him. In doing so, he does not go lightly on Heidegger, in whom he finds a philosophical and "historial" anti-Semitism, outlining a clash of "peoples" that must at all costs arrive at "another beginning." If Heidegger's uncritical acceptance of prejudices and long-debunked myths about "world Jewry" shares in the "banality" evoked by Hannah Arendt, this does nothing to lessen the charge. Nancy's purpose, however, is not simply to condemn Heidegger but rather to invite us to think something to which the thinker of being remained blind: anti-Semitism as a self-hatred haunting the history of the West-and of Christianity in its drive toward an auto-foundation that would leave behind its origins in Judaism.