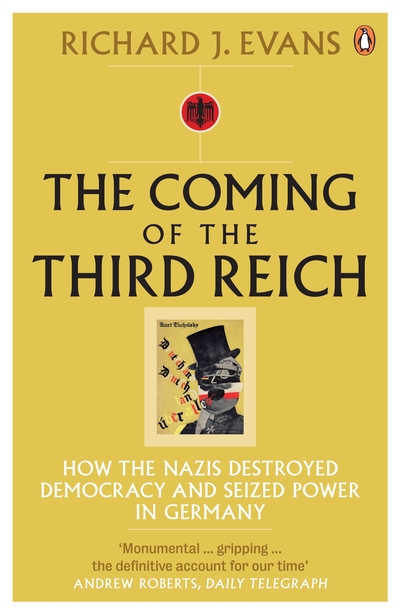 The Coming of the Third Reich

Richard J. Evans' The Coming of the Third Reich: How the Nazis Destroyed Democracy and Seized Power in Germany explores how the First World War, the Weimar Republic and the Great Depression paved the way for Nazi rule.

They started as little more than a gang of extremists and thugs, yet in a few years the Nazis had turned Germany into a one-party state and led one of Europe's most advanced nations into moral, physical and cultural ruin and despair.

In this consummate and compelling history, the first book in his acclaimed trilogy on the rise and fall of Nazi Germany, Richard Evans reveals how and why it happened, questions whether the rise of Hitler was inevitable and dramatically re-creates the maelstrom of disorder, economic disaster, violence and polarization that gave rise to the terror of the Third Reich.

'Impressive ... perceptive ... humane ... the most comprehensive history in any language of the disastrous epoch of the Third Reich'
Ian Kershaw, author of Hitler

'The most gripping account I've read of German life before and during the rise of the Nazis'
A.S. Byatt, Times Literary Supplement Books of the Year

Sir Richard J. Evans is Professor of Modern History at Cambridge University. His previous books include In Defence of History, Telling Lies about Hitler and the companions to this title, The Coming of the Third Reich and The Third Reich at War.