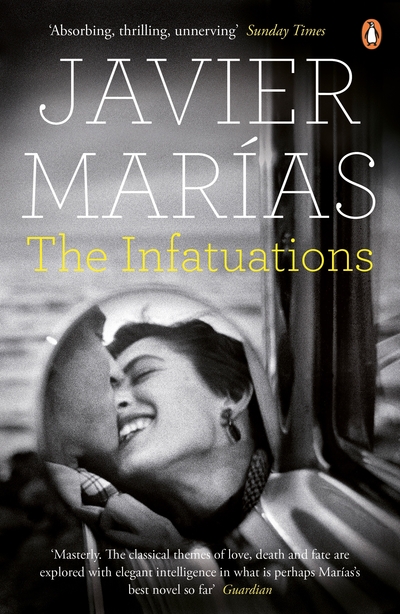 The Infatuations is a critically acclaimed novel by the great Spanish writer Javier Marias.

Every day, Maria Dolz stops for breakfast at the same cafe. And every day she enjoys watching a handsome couple who follow the same routine. Then one day they aren't there, and she feels obscurely bereft.

It is only later, when she comes across a newspaper photograph of the man, lying stabbed in the street, his shirt half off, that she discovers who the couple are. Some time afterwards, when the woman returns to the cafe with her children, who are then collected by a different man, and Maria approaches her to offer her condolences, an entanglement begins which sheds new light on this apparently random, pointless death.

With The Infatuations, Javier Marias brilliantly reimagines the murder novel as a metaphysical enquiry, addressing existential questions of life, death, love and morality.

Praise for The Infatuations:

'Mesmerising . . . chillingly clear and hypnotically eerie . . . At this very fine and disturbing novel's core is a compelling meditation on love in all its ramifications' Herald

'Keeps us guessing until almost the last page' Financial Times

'Few writers have sustained such an engagement with the classic (Anglophone) canon. As a translator he has rendered into Spanish work by Hardy, Yeats, Conrad, Nabokov, Faulkner, Updike, Salinger and many others. As a novelist, he has threaded his work with traces of these writers, and is explicitly underpinned by an empathy with Shakespeare and Sterne, as well as Cervantes and Proust' Guardian

Javier Marias was born in Madrid in 1951. He has published thirteen novels, two collections of short stories and several volumes of essays. His work has been translated into forty-two languages and won a dazzling array of international literary awards.

Margaret Jull Costa has been a literary translator for over twenty-five years and has translated many novels and short stories by Portuguese, Spanish and Latin American writers, including Javier Marias, Fernando Pessoa, Jose Saramago, Bernardo Atxaga and Ramon del Valle-Inclan.