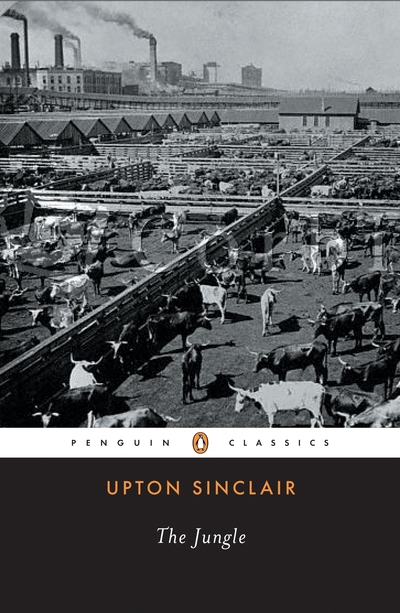 One of the most powerful, provocative and enduring novels to expose social injustice ever published in the United States, Upton Sinclair's The Jungle contains an introduction by Ronald Gottesman in Penguin Classics.

Upton Sinclair's dramatic and deeply moving story exposed the brutal conditions in the Chicago stockyards at the turn of the nineteenth century and brought into sharp moral focus the appalling odds against which immigrants and other working people struggled for their share of the American Dream. Denounced by the conservative press as an un-American libel on the meatpacking industry, and condemned for Sinclair's unabashed promotion of Socialism and unionisation as a solution to the exploitation of workers, the book was championed by more progressive thinkers, including then President Theodore Roosevelt, and was a major catalyst to the passing of the Pure Food and Meat Inspection act, which has tremendous impact to this day.

Upton Sinclair (1878-1968) was born into an impoverished Baltimore family, the son of an alcoholic liquor salesman. At fifteen, he began writing a series of dime novels to pay for his education at the City College of New York, and he was later accepted to do graduate work at Columbia. While there, he published a number of novels, but his breakthrough was The Jungle (1906), a scathing indictment of the vile health and working conditions of the Chicago meat-packing industry. After a dalliance with politics, Sinclair returned to novel-writing, winning the Pulitzer Prize for his account of the Nazi takeover of Germany in Dragon's Teeth (1942).

If you enjoyed The Jungle, you might like Saul Bellow's The Adventures of Augie March, also available in Penguin Classics.