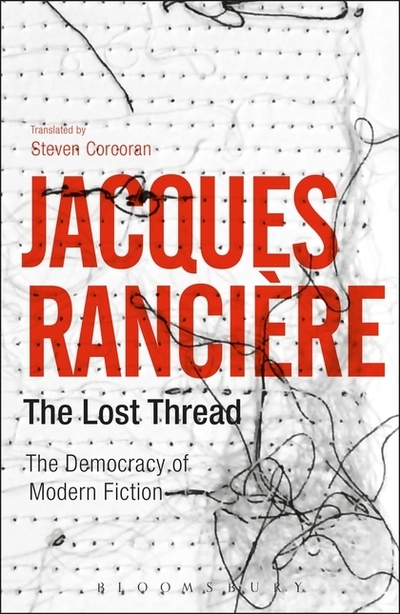 In The Lost Thread, Ranciere debunks the notion of Flaubert, Baudelaire, Conrad, Woolf and Keats as reactionary producers of bourgeois mythologies, and instead foregrounds the egalitarian and democratic impulses of modernist literature. Contrary to the canonical interpretation of the relation between modernism and capitalism via the commodification of everyday life, Ranciere proposes a radical rethinking of our received ideas regarding the politics of aesthetics in the modern era. Through a complex and original stitching together of form and content, modernists strove to depict by embodying new forms and regimes of material and everyday life. Ranciere articulates this substantial change in the politics of representation by explaining the shattering of the sacrosanct hierarchies of the genres and life-forms of classical literature. In the midst of the 19th century, poets, novelists and playwrights challenged the narrative staples of noble means and moral ends, and introduced an entirely new "structure of feeling". In this work, Ranciere continues his project of outlining an egalitarian "distribution of the sensible" as the compelling linkage between politics and aesthetics in the modern age. The Lost Thread not only advances Ranciere's commended work on aesthetics, it also offers the reader in depth analyses of the writers in question.