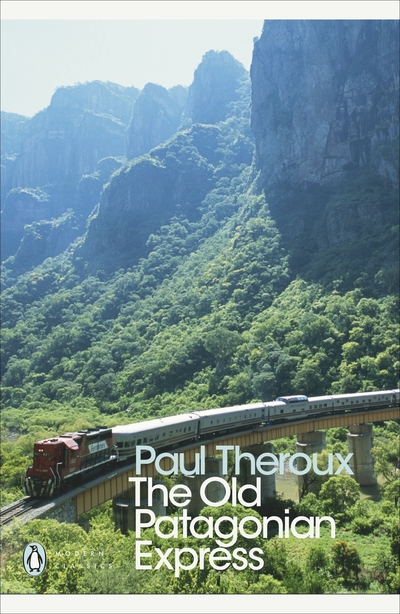 Setting off in his hometown, and ending up 'almost at the end of the world', Paul Theroux's The Old Patagonian Express is a travel writing tour de force from one of the masters of the genre contains a new preface by the author in Penguin Modern Classics.

'The journey, not the arrival, matters'

The Old Patagonian Expresstells of Paul Theroux's train journey down the length of North and South America. Beginning on Boston's subway, he depicts a voyage from ice-bound Massachusetts to the arid plateau of Argentina's most southerly tip, via pretty Central American towns and the ancient Incan city of Macchu Pichu. Shivering and sweating by turns as the temperature and altitude rise and plummet, he describes the people he encountered - thrown in with the tedious, and unavoidable, Mr Thornberry in Limon and reading to the legendary blind writer, Jorge Luis Borges, in Buenos Aires. Witty, sharply observed and beautifully written, this is a richly evocative account of travelling to 'the end of the line'.

Paul Edward Theroux (b. 1941) is an American travel writer and novelist, born in Medford, Massachusetts. Among his best known works of travel-writing are The Great Railway Bazaar (1975), The Old Patagonian Express (1979), and Riding the Iron Rooster (1985). Theroux has published numerous works of fiction, some of which have been adapted into films, including The Mosquito Coast (1981), a 1986 film directed by Peter Weir and starring Harrison Ford and Helen Mirren. Theroux is the father of British documentary filmmaker Louis Theroux, and the uncle of American actor and screenwriter Justin Theroux.

If you enjoyed The Old Patagonian Express, you might like Antoine de Saint-Exupery's Wind, Sand and Stars, also available in Penguin Modern Classics.

'Travel writing at its most accomplished'
Sunday Telegraph