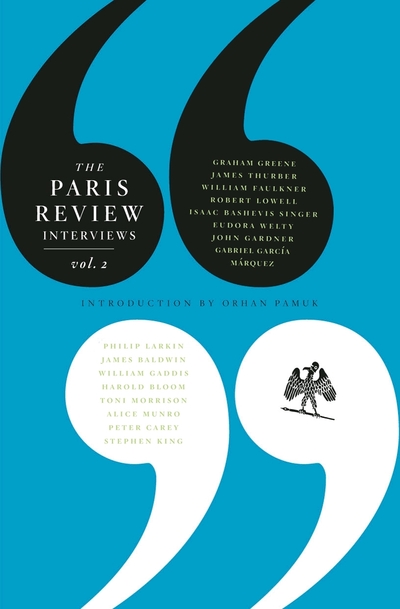 Since The Paris Review was founded in 1953, it has given us invaluable conversations with the greatest writers of our age, vivid self-portraits that are themselves works of finely-crafted literature. From Faulkner's determination that a great novel takes 'ninety-nine percent talent . . . ninety-nine percent discipline . . . ninety-nine percent work', to Gabriel Marquez's observation that 'in the first paragraph you solve most of the problems with your book', The Paris Review has elicited revelatory and revealing thoughts from our most accomplished novelists, poets and playwrights. With an introduction by Orhan Pamuk, this volume brings together another rich, varied crop of literary voices, comprising: Graham Greene, James Thurber, William Faulkner, Robert Lowell, Isaac Bashevis Singer, Eudora Welty, John Gardner, Gabriel Garcia Marquez, Philip Larkin, James Baldwin, William Gaddis, Harold Bloom, Toni Morrison, Alice Munro, Peter Carey and Stephen King. 'A colossal literary event' as Gary Shteyngart put it, The Paris Review Interviews vol. 2 is a treasury of wisdom from the world's literary masters.