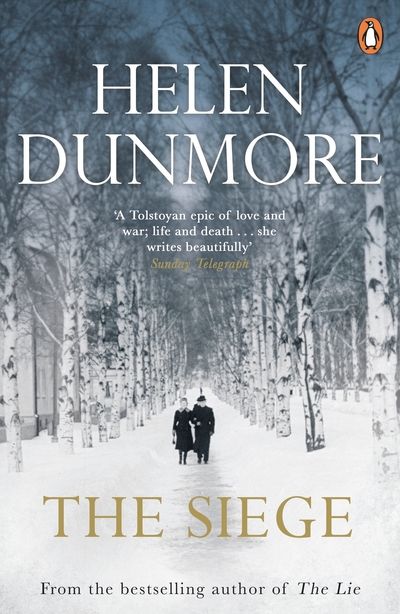 Leningrad, September 1941. Hitler orders the German forces to surround the city at the start of the most dangerous, desperate winter in its history. For two pairs of lovers - Anna and Andrei, Anna's novelist father and banned actress Marina - the siege becomes a battle for survival. They will soon discover what it is like to be so hungry you boil shoe leather to make soup, so cold you burn furniture and books. But this is not just a struggle to exist, it is also a fight to keep the spark of hope alive...

A brilliantly imagined novel of war and the wounds it inflicts on ordinary people's lives, and a profoundly moving celebration of love, life and survival.

'Remarkable, affecting...there are few more interesting stories than this; and few writers who could have told it better' Rachel Cusk, Daily Telegraph

'Literary writing of the highest order set against a background if suffering so intimately reconstructed it is hard to believe that Dunmore was not there' Richard Overy, Sunday Telegraph

'Utterly convincing. A deeply moving account of two love stories in terrible circumstances. The story of their struggle to survive appears simple, as all great literature should. . . a world-class novel' Antony Beevor, The Times

Novelist and poet Helen Dunmore has achieved great critical acclaim since publishing her first adult novel, the McKitterick Prize winning, Zennor in Darkness. Her novels, Counting the Stars, Your Blue-Eyed Boy, With Your Crooked Heart, Burning Bright, House of Orphans, Mourning Ruby, A Spell of Winter, and Talking to the Dead, and her collection of short stories Love of Fat Men are all published by Penguin. This edition includes the first chapter of Betrayal, the sequel to The Siege.