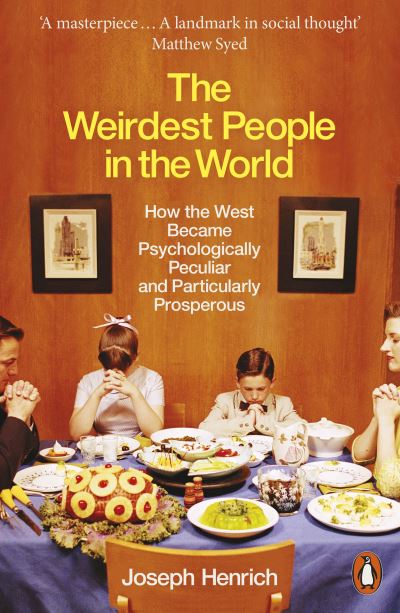 The Weirdest People in the World

'A landmark in social thought. Henrich may go down as the most influential social scientist of the first half of the twenty-first century' MATTHEW SYED

Do you identify yourself by your profession or achievements, rather than your family network? Do you cultivate your unique attributes and goals? If so, perhaps you are WEIRD: raised in a society that is Western, Educated, Industrialized, Rich and Democratic.

Unlike most who have ever lived, WEIRD people are highly individualistic, nonconformist, analytical and control-oriented. How did WEIRD populations become so psychologically peculiar? What part did these differences play in our history, and what do they mean for our collective identity?

Joseph Henrich, who developed the game-changing concept of WEIRD, uses leading-edge research in anthropology, psychology, economics and evolutionary biology to explore how changing family structures, marriage practices and religious beliefs in the Middle Ages shaped the Western mind, laying the foundations for the world we know today. Brilliant, provocative, engaging and surprising, this landmark study will revolutionize your understanding of who - and how - we are now.

'Phenomenal ... The only theory I am aware of that attempts to explain broad patterns of human psychology on a global scale' Washington Post

'You will never look again in the same way at your own seemingly universal values' Uta Frith, Professor of Cognitive Development, University College London