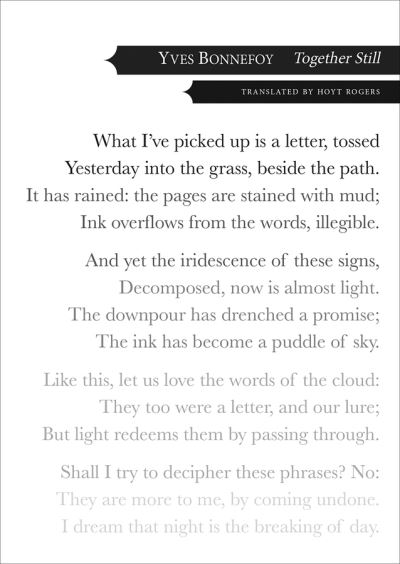 The international community of letters mourns the recent death of Yves Bonnefoy, universally acclaimed as one of France's greatest poets of the last half-century. A prolific author, he was often considered a candidate for the Nobel Prize and published a dozen major collections of poetry in verse and prose, several books of dream-like tales, and numerous studies of literature and art. His oeuvre has been translated into scores of languages, and he himself was a celebrated translator of Shakespeare, Yeats, Keats, and Leopardi.Together Still is his final poetic work, composed just months before his death. The book is nothing short of a literary testament, addressed to his wife, his daughter, his friends, and his readers throughout the world. In these pages, he ruminates on his legacy to future generations, his insistence on living in the present, his belief in the triumphant lessons of beauty, and, above all, his courageous identification of poetry with hope.