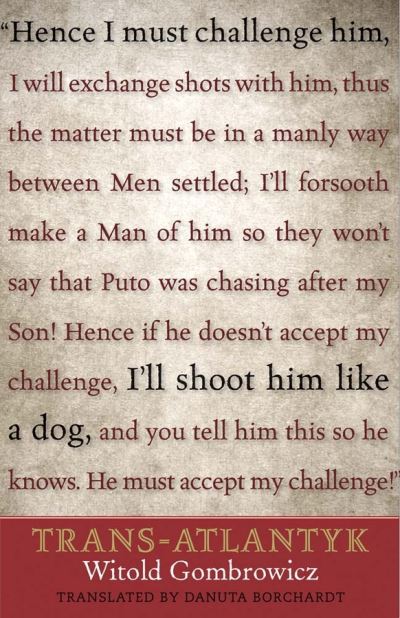 A brilliant, semiautobiographical satirical novel from one of the foremost figures in twentieth-century Polish literature, now in a new English translation

Considered by many to be among the greatest writers of the past hundred years, Polish novelist Witold Gombrowicz explores the modern predicament of exile and displacement in a disintegrating world in his acclaimed classic Trans-Atlantyk. Gombrowicz's most personal novel-and arguably his most iconoclastic-Trans-Atlantyk is written in the style of a gaweda, a tale told by the fireside in a language that originated in the seventeenth century. It recounts the often farcical adventures of a penniless young writer stranded in Argentina when the Nazis invade his homeland, and his subsequent "adoption" by the Polish embassy staff and emigre community.

Based loosely on Gombrowicz's own experiences as an expatriate, Trans-Atlantyk is steeped in humor and sharply pointed satire, interlaced with dark visions of war and its horrors, that entreats the individual and society in general to rise above the suffocating constraints of nationalistic, sexual, and patriotic mores. The novel's themes are universal and its execution ingenious-a masterwork of twentieth-century literary art from an author whom John Updike called "one of the profoundest of the late moderns."