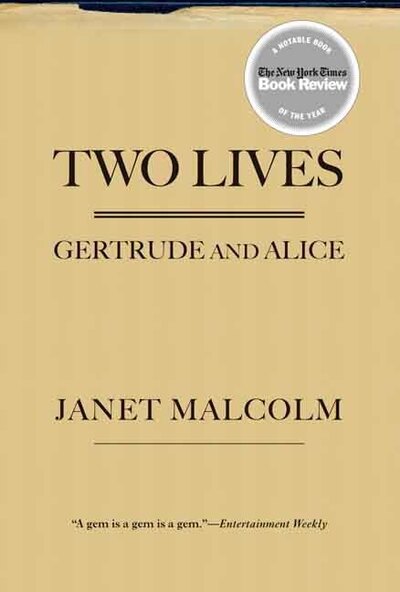 Winner of the PEN/Jacqueline Bograd Weld Award for Biography: the story of the mystifying relationship between the brilliant and affable Gertrude Stein and her brooding companion, Alice B. Toklas

"Janet Malcolm deftly captures Alice B. Toklas's legendary 40-year partnership with the brilliant modernist Gertrude Stein in Two Lives, clearing up a few mysteries along the way-including how two Jewish women were able to survive World War II in their provincial French chateau with the help of a Vichy collaborator."-Vogue

"How had the pair of elderly Jewish lesbians survived the Nazis?" Janet Malcolm asks at the beginning of this extraordinary work of literary biography and investigative journalism. The pair, of course, is Gertrude Stein, the modernist master "whose charm was as conspicuous as her fatness" and "thin, plain, tense, sour" Alice B. Toklas, the "worker bee" who ministered to Stein's needs throughout their forty-year expatriate "marriage." As Malcolm pursues the truth of the couple's charmed life in a village in Vichy France, her subject becomes the larger question of biographical truth. "The instability of human knowledge is one of our few certainties," she writes. The portrait of the legendary couple that emerges from this work is unexpectedly charged. The two world wars Stein and Toklas lived through together are paralleled by the private war that went on between them. This war, as Malcolm learned, sometimes flared into bitter combat.Two Lives is also a work of literary criticism. "Even the most hermetic of [Stein's] writings are works of submerged autobiography," Malcolm writes. "The key of 'I' will not unlock the door to their meaning-you need a crowbar for that-but will sometimes admit you to a kind of anteroom of suggestion." Whether unpacking the accessible Autobiography of Alice B. Toklas, in which Stein "solves the koan of autobiography," or wrestling with The Making of Americans, a masterwork of "magisterial disorder," Malcolm is stunningly perceptive.Praise for the author:"[Janet Malcolm] is among the most intellectually provocative of authors . . .able to turn epiphanies of perception into explosions of insight."-David Lehman, Boston Globe"Not since Virginia Woolf has anyone thought so trenchantly about the strange art of biography."-Christopher Benfey