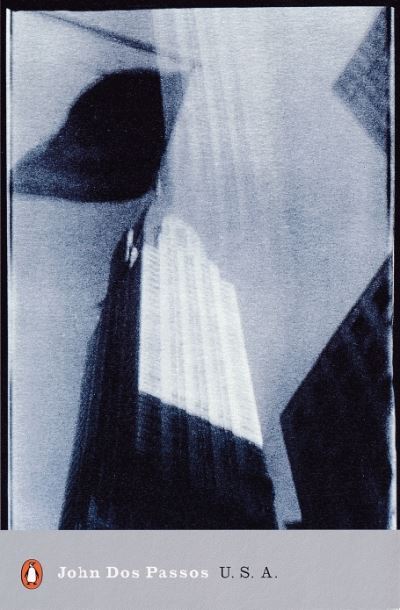 The Penguin Modern Classics edition of John Dos Passos' U.S.A. is a groundbreaking work of experimental fiction which, with its unique melange of fact and fiction, creates a compelling, tragic vision of America at the dawn of the twentieth century.

In this experimental trilogy, Dos Passos uses 'camera eye' and 'newsreel' sections to create a fragmented atmosphere. Through the testimony of numerous characters, both fictional and historical figures, he builds up a composite picture of American society in the first quarter of the 20th century. Richly detailed and throbbing with vitality, U.S.A. vividly evokes that uncertain period when America, so full of ideas and potential, was slowly and painfully abandoning the great American Dream.

John Dos Passos (1896-1970) was born in Chicago, the son of an eminent lawyer. After graduating from Harvard he served in the US Army Medical Corps during the First World War, and dabbled in journalism before embarking on life as a writer. In 1925 he published Manhattan Transfer, his first experimental novel in what was to become his peculiar style - a mixture of fact and fiction. His began a series of panoramic epics of American life with the U.S.A. trilogy, using the same technique and tracing, through interwoven biographies, the story of America from the early twentieth century to the onset of the Great Depression in 1929.