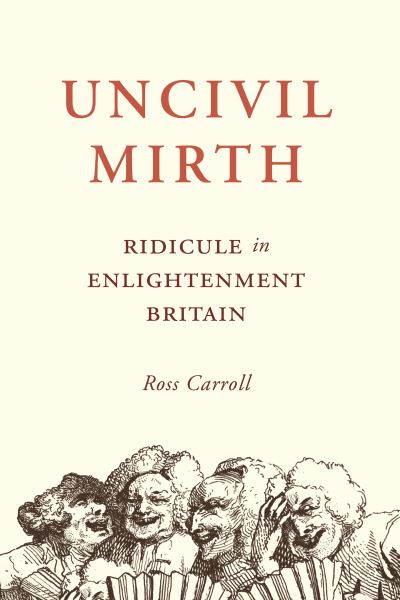 How the philosophers and polemicists of eighteenth-century Britain used ridicule in the service of religious toleration, abolition, and political justice

The relaxing of censorship in Britain at the turn of the eighteenth century led to an explosion of satires, caricatures, and comic hoaxes. This new vogue for ridicule unleashed moral panic and prompted warnings that it would corrupt public debate. But ridicule also had vocal defenders who saw it as a means to expose hypocrisy, unsettle the arrogant, and deflate the powerful. Uncivil Mirth examines how leading thinkers of the period searched for a humane form of ridicule, one that served the causes of religious toleration, the abolition of the slave trade, and the dismantling of patriarchal power.

Ross Carroll brings to life a tumultuous age in which the place of ridicule in public life was subjected to unparalleled scrutiny. He shows how the Third Earl of Shaftesbury, far from accepting ridicule as an unfortunate byproduct of free public debate, refashioned it into a check on pretension and authority. Drawing on philosophical treatises, political pamphlets, and conduct manuals of the time, Carroll examines how David Hume, Mary Wollstonecraft, and others who came after Shaftesbury debated the value of ridicule in the fight against intolerance, fanaticism, and hubris.

Casting Enlightenment Britain in an entirely new light, Uncivil Mirth demonstrates how the Age of Reason was also an Age of Ridicule, and speaks to our current anxieties about the lack of civility in public debate.