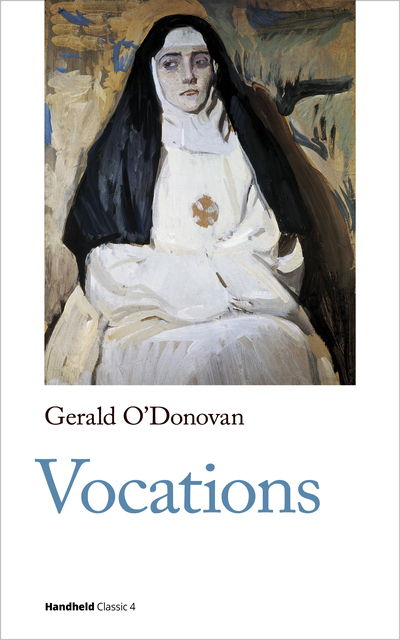 `If we don't sit here where have we to go?' `Well, there's our walk every day. And we are allowed out twice if it is fine, and our boating in summer, and our little visits to the church and to the convents.' `And you're twenty-one and I'm nineteen and a half,' Kitty said hysterically. `My God, what a life! Never allowed to speak to anyone but blind Lanty and a few beggars. Everyone we pass on the street is either someone we're not allowed to speak to or someone who won't speak to us. We're either "the stuck-up Miss Curtins", or "those dolls, Tom Curtin the publican's daughters".' Gerald O'Donovan's novel Vocations (1921) is set in a small town in late Victorian Ireland, and is a searing indictment of treating young women like commodities, in the marriage market or the market in nuns. O'Donovan was ordained in 1895, and was a friend of Lady Gregory, W B Yeats and George Moore, and a supporter of the Gaelic League. He left the priesthood in 1908 to work in London's East End, and married in 1910. His relationship with the novelist Rose Macaulay lasted from the end of the First World War to his death in 1942, and Vocations was written at the height of their secret affair. It depicts the local priests competing to acquire girls and their dowries for the church, and enjoying their high status in the town. Winnie and Kitty Curtin, the two daughters of the wealthy grocer, are being firmly driven towards the Sisters of Mercy by their determined mother. Winnie is in love with Father Burke, and Kitty is uselessly in love with Dr Thornton, but their mother is determined that the convent will have them both. Kitty's furious resistance to becoming a nun is thwarted by a most unattractive suitor, and Winnie's glad embrace of the veil is driven by her secret passion. But the convent does not control the girls completely, and they take charge of their futures. Chrissie Van Mierlo's introduction explores the cultural and religious background to the novel, and its place in O'Donovan's writing.