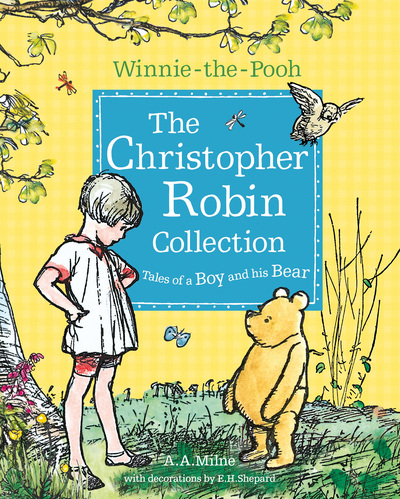 Let's celebrate 100 years since the birth of Christopher Robin!

Christopher Robin lives behind a green door in the Hundred Acre Wood. He likes catching Woozles, leading expeditions and throwing parties with Piglet, Rabbit, Eeyore and, of course, his very best friend, Winnie-the-Pooh.

This charming collection of stories and poems features the wonderful adventures that Christopher Robin has with Winnie-the-Pooh and his friends in the Hundred Acre Wood. The stories are selected from A.A.Milne's Winnie-the-Pooh, The House at Pooh Corner, When We Were Very Young & Now We Are Six. These extraordinary tales of a Boy and his Bear, are accompanied by E.H.Shepard's beautiful, timeless illustrations.

Christopher Robin became a movie star in his own right in 2018 with the release of Christopher Robin, a live-action film that follows a grown-up Christopher (Ewan McGregor) as he reunites with his childhood playmates Winnie-the-Pooh, Piglet, Tigger, Eeyore, Rabbit and many more – returning to The Hundred Acre Wood for the first time since he was a boy.

This collection of favourite stories and poems is the perfect companion for fans of the film and of Christopher Robin and friends, teaching lessons of friendship and reflecting the power of a child's imagination.