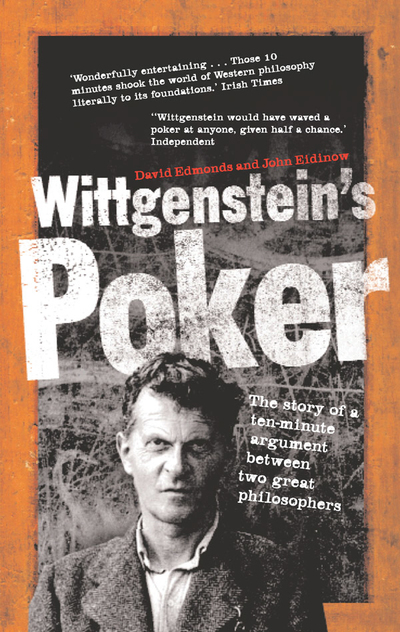 On 25 October 1946, in a crowded room in Cambridge, Ludwig Wittgenstein and Karl Popper came face to face for the first and only time. The encounter lasted only ten minutes, and did not go well. Almost immediately, rumours started to spread around the world that the two philosophers had come to blows, armed with red-hot pokers. But what really happened? Wittgenstein's Poker engagingly winds together philosophy, history and biography into a compelling piece of detective work. It ranges from the place of assimilated Jews in fin-de-siecle Vienna, to what happens to memory under stress, to a vivid portrait of Cambridge and its eccentric set of philosophy dons, including Bertrand Russell (who acted as umpire during the altercation). At the centre of the story stand the philosophers themselves, proud, irascible, larger than life, and spoiling for a fight. 'Those ten minutes shook the world of Western philosophy literally to its foundations . . . Edmonds and Eidinow have a very good story to tell, and they tell it wonderfully well.' Irish Times 'A meaty, exceedingly well-researched and engaging book. In its dramatic readability Wittgenstein's Poker brings to mind Simon Winchester's The Professor and the Madman; in the depth and breadth of its scholarship it evokes Carl Schorske's Fin-de-siecle Vienna . . . a marvel of passionate journalism.' San Francisco Chronicle