‘Not a beekeeper, but a hive keeper’: Bill Anderson on raising bees the natural way 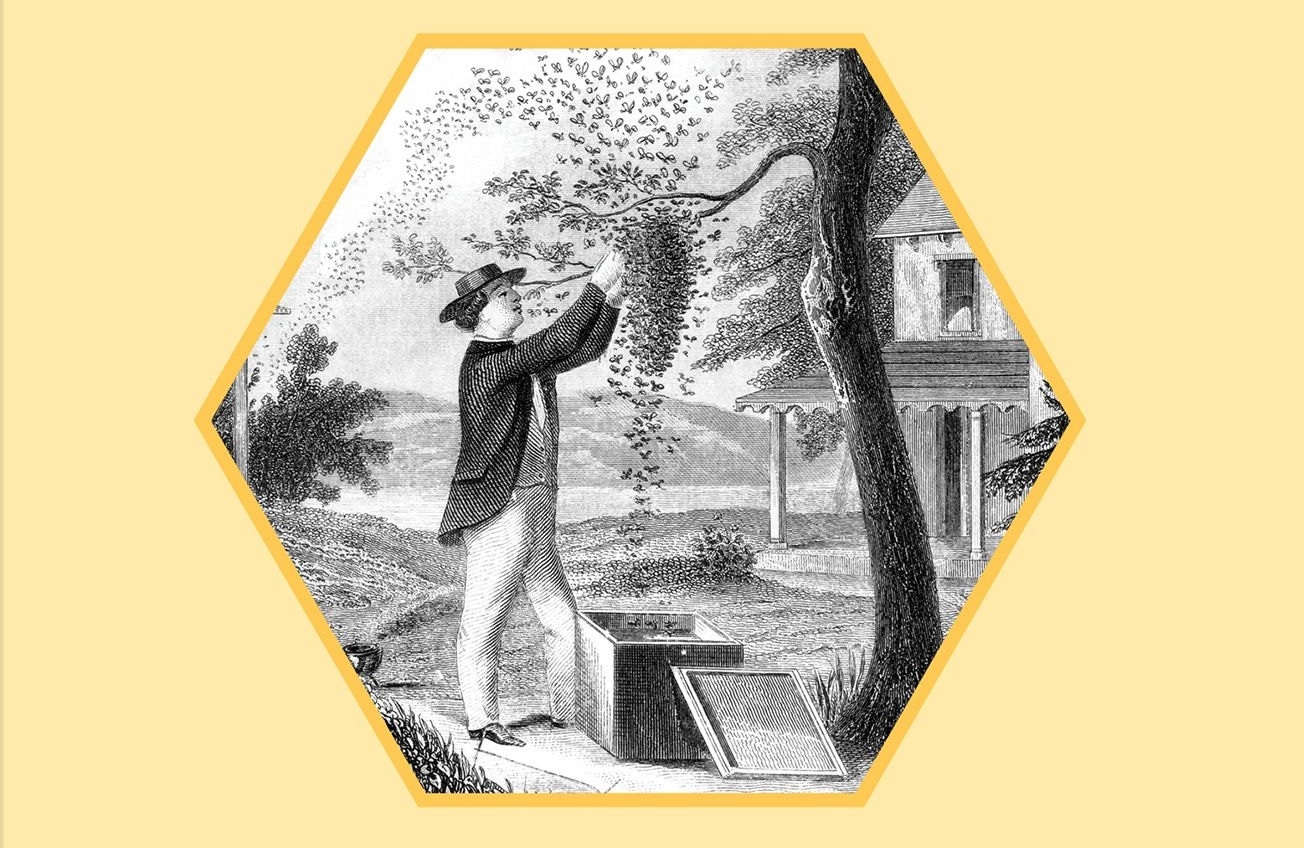 Bill Anderson, author of The Idle Beekeeper, will join us at our next Late Shopping Evening on Wednesday 3 July, when he'll be providing honey from his own hives for Terry's boozy honey tea, and signing copies of his book. Book your free ticket here. Below, Bill talks about his laid-back approach to beekeeping, and how it makes for happier bees and better honey.

Not a beekeeper, but a hive keeper – like an innkeeper who provides accommodation for guests who can leave whenever they like and only stay because they choose. Not like a prison warden who dictates how their inmates will live.

There was great excitement at the University of Cardiff recently when they discovered some Welsh honey that is as powerfully anti-microbial as the legendary Manuka honey from New Zealand, famed for its healing powers and exorbitant cost. The outstanding Welsh honey came from two hives kept by a druid in Tywyn, Cardigan Bay, but the scientists weren’t interested in stone circles or solstices: the pollen of every plant species in Wales has been DNA barcoded, and the Cardiff academics were using this database to track minute amounts of pollen in the Tywyn honey, and thereby identify the particularly medicinal Welsh flowers the bees must have visited. There are even plans to carpet the roof of a shopping centre in these flowers, providing Cardiff bees with the source for a commercialized Welsh super-honey – “Cymruka™”…?

But the academics discovered this isn’t an entirely Welsh phenomenon: a hive in Hythe, Southampton also produced honey every bit as super as that from the two hives in Tywyn. And there’s a connection between these three that also surpasses nationality: they’re all unconventional hives that require a system of beekeeping that aspires to be more bee-friendly. They’re all Warré hives, and I’ve got six on my roof off the Portobello Road in London.

So what’s the difference with the Warré? And could the hive itself contribute to anti-microbial potency of its residents’ honey?

In a conventional hive, the nursery is separated from the larder. The hexagonal structure of the wax honeycomb may seem pretty uniform, but the queen bee is kept out of the area where honey is stored. She’s the only bee in the hive that lays eggs, and she’s slightly bigger than all the worker bees. Conventional beekeepers exploit her size by using a grid she can’t fit through - a “queen excluder” - to partition off boxes on top of the hive - “supers” - where worker bees have exclusive access to store honey in a child-free environment that’s also extremely convenient for the beekeeper.

A Warré hive tries to emulate the bees’ natural habitat, a cavity in a tree. Nothing in that cavity reins in the freedom of movement of the queen. She can go where she likes, lay where she likes, and her entourage of worker bees will store honey and pollen to feed their young in whatever empty wax comb happens to be available nearby. So too in the Free Range Warré hive, where the bees expand the nest of comb downwards, interlinking legs, and forming bee-chains from which they hang and exude wax to build perfectly vertical curtains of comb. The queen generally prefers to lay her eggs in this fresh, new, white wax comb at the bottom of the nest, and as this area becomes the hub of the nursery, the older comb at the very top, now vacated by hatched-out young, gets used more and more exclusively to store honey for winter fuel.

As in the bees’ unfettered natural habitat, the honey cells of the Warré honeycomb will have been flexibly re-used for many different purposes: baby-gro; nectar distiller; baby-gro; pollen stash; baby-gro; honey store. And between each change of use, the bees will have cleaned out the cells. Scrupulously. But when you’re converting a cell from raising babies to storing food, making a soiled nappy clean enough to use as a table napkin presents significant hygiene challenges…

Fortunately bees don’t want their honey to taste of baby poo either, and so they cover the surfaces of prospective honeycomb storage cells with a dark-brown disinfectant varnish called “propolis”. Made from anti-viral, anti-fungal, and anti-microbial plant resins the bees collect and enhance, propolis is used to coat every surface of the hive: a warm, humid confined space full of nectar and honey would be heaven for fungi, viruses and microbes without it. And whilst the bees will use propolis liberally to mummify and entomb an invading mouse that they’ve stung to death but can’t physically remove from the hive, gathering propolis consumes energy, and efficiency rules everything bees do - they will always use the absolute minimum.

In a conventional hive, the cells used to store honey are never used for any other purpose. They have never harboured baby poo. Or even adolescent socks. So we can suppose that a canny bee assessing how much propolis is needed to protect the flavour of its honey in this clean wax comb will think, “Not much”.

Whereas an equally canny bee in a Warré hive planning to store its honey in cells of comb that have contained generations of baby poo might think, “Quite a bit”, and propolise lavishly to ensure the honey will remain delicious.

Whisky drinkers will know that the distilled spirit that goes into the whisky barrel is clear, much like vodka, but comes out brown. Because of what it absorbs from the inner surface of the barrel - the remnants of the sherry that used to be stored there, along with compounds from the wood.

Maybe the Warré honey is significantly higher in anti-microbial compounds because it’s absorbed them from the greater levels of anti-microbial propolis it comes into contact with in the cells of the honeycomb where it’s stored? Propolis from different plants definitely brings distinctly different additional flavours into the mix. The honey stored this way is certainly what the bees themselves would naturally consume. And if on a distillery tour you were lucky enough to catch some of the workers helping the Angels Share out a crafty dram, wouldn’t you want to taste the whisky from the barrel of their choice?